You are here: Home / la palina

This morning I started to watch the documentary about the Grateful Dead. It’s a 3 plus hours epic about my favorite rock band. The film comes in several parts so I only viewed the first 50 minutes of so. I wanted to sit through the whole film but decided to take it in doses and needed to write this review.  Might also review the film but let’s get the dope on the cigar leaf.

Where and when smoked: Lone Wolf Cigar Lounge, Los Angeles, 7/15/17

A handsome chocolate wrapper with a striking combo band. Nice soft feel and oily. Solid construction with no obvious issues or faults. Small veins are visible.

Strong start with intense spice popping, flavor of heavy pepper. A nutty undertone of hazelnut and burnt orange. Pretty interesting to the palate.

Smooth cool burn with a dark ash. The strong flavor of pepper is still the majority taste. Slight uneven burn at the 1/2 way point. Sometimes I wonder if burn issues are overrated. If you enjoy the smoke, should you be concerned about this?

This is a strong smoke with a heavy dose of spice. Its power is evident throughout. Take your time smoking this cigar with easy puffs. I could imagine getting a head rush if you power through the cigar.

Final Thoughts and the numbers:

A very good choice for most smokers who desire a full-bodied cigar. La Palina has produced a nice addition to its lineup. Make it a part of your humidor but it’s a “bad boy.”

Smoking Characteristics: 3.5 out of 5

Time for the review. As always how and where I purchased the cigar does not influence my thoughts on the product. If this review gives you curiosity about the smoke , please try the cigar yourself.

The lean profile of this smoke gives it a striking appearance.  Well constructed wrapper, slight oil to the touch. Small seams are visible but no defects noted.  It looks could kill this cigar might be a lethal weapon.

The first third is dominated by a fruity merging of citrus, and tangerine which was very smooth and pleasant. As you puff a bit, there is also a presence of a mild pepper influence but would not call this a spicy combo. It is an interesting mix to me with enough of a complexity to keep the smoke very enjoyable.

A quality burn with no discernible issues, remained cool , stayed lit and quite even. Around the 2/3’s mark the cigar had more a spice kick but that just enhanced the overall pleasure  of the experience.

With my new-found interest in lancero cigars, I am discovering products that probably would have been ignored. I like what La Palina is doing with their product line with a retooling of the brand, offering a lower price point and opening up the market to more consumers. Let’s see how the quality will turn out through the next several years. Can they be consistent in their product line?

This is a winner of a cigar and has all the aspects of a quality product. I have a sampler of La Palina cigars to taste and review and am looking forward to giving them a try.

Flavor/Taste and Aroma: 4 out of 5

This is a very good smoke and needs to be in your humidor. 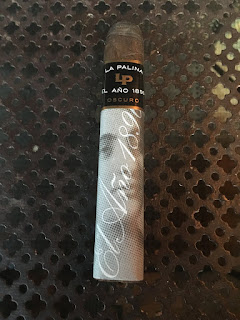 The name of this cigar does not roll off your tongue very easily. Cigar marketing has become so elaborate trying to distinguish one brand from another.
Even within their own brand names may become confusing. The cigar consumer may think they are smoking one cigar that someone told them about but the cigar lines become confusing.
As always, how or where I received the cigar does not impact my subjective judgment about the review. 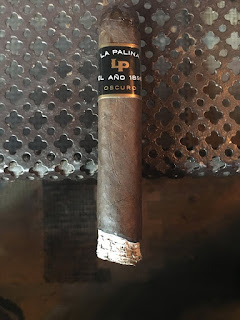 Boxed press, dark brown wrapper, and a very classy black and gold band. The cigar also had a impressive looking wrapper that covered the whole body. I almost did not want to take the printed wrapper off it was so good looking. However, my job was to report on the cigar blend, not just look at it.  It was very solid and slightly oily to the touch. No blemishes or soft spots were evident.  Well constructed with no obvious imperfections.

There was an initial hit of chocolate/coffee combo.  A patron of the lounge commented to me the aroma of nuts was quite noticeable. The cigar was generally milder than I thought it would be. If you like classifications it medium in scope but not at all overpowering or spicy. Nothing in the first third of the smoke would be described as, “This is an unbelievable cigar.”

Light grey ash which burned very cool and steady. There was no tunneling or edges that might have challenged the cigar smoker. The ash might be the most impressive point about the cigar. While this is clearly important, is it enough to make your purchase the smoke?

Conclusion/ Overall Impression:
As I stated earlier, the cigar had great construction, burn and ash. As for flavor it was underwhelming with no real feel or passion. The taste was muddled with no high points. If you like a good looking but not very complex blend, this could be your baby. 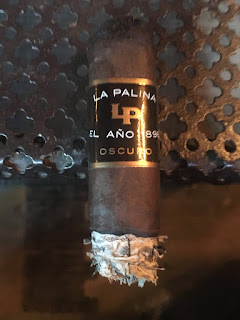 Final Thoughts and Numbers:
With a brand new blend, and the threat of the FDA  causing cigar companies rushing product  into production perhaps too early, this cigar needs to sit in the humidor for a decent amount of time. Maybe in the second run, La Palina could add some spice to the mix and give it some character.
The cigar shows some promise but right now it is a pass.
Appearance/ Construction:  4 out of 5
Flavor/ Taste Aroma: 2 out of 5
Smoking Characteristics: 3.5 out of 5.
Conclusion/ Overall Impression: 3 out of 5
*Credit: Frank “Bo” Gerechter, The Urban Fishing Pole